Founded in the summer of 2012, we started playing field hockey as a group of friends who knew each other from student life and the LGBT community. Some of us were familiar with playing field hockey, others weren’t. But that didn’t matter because the main goal was to have fun and to just have another reason to get together on Monday evenings (and maybe to get a bit fitter eventually). We never thought it would turn into this life changing journey with amazing experiences and many new friends throughout Europe in a community called PinkHockey.

Nowadays, most of us aren’t students anymore but we still live in Amsterdam and we still love to play hockey on a casual basis - with team members’ ages ranging from 22 to 38 years. The Babygays have represented The Netherlands as a young & new generation among the international LGBT PinkHockey community for eight consecutive seasons now! Over 45 individuals have worn the infamous Babygays jersey in tournaments and matches to date - from ex-Hoofdklasse players to total beginners and everything in between.

See our detailed history below.

We start in the beginning of September and train weekly until the main PinkHockey tournament in the summer, with a winter break during the months December, January, February. You can join during the first half of the season as well as during the second half. The fee to cover the training costs and equipment for season 2019/2020 will be announced later on.

Training is every Monday evening from 19:30 till 21:00 at the hockey grounds of AMVJ.

Winter break is almost over and we start again with our weekly training sessions on Monday March 9th! Come have a look.

The Dutch PinkHockey men - called the Pink Lions - also train every Monday, from 21:00 til 22:30 at AMVJ and they're always open to new players!

Join the training group on Facebook to get the latest details about training, cancellations, and social events.

AMVJ is a proud partner of PinkHockey and both the Dutch men and women can train here and use the facilities. 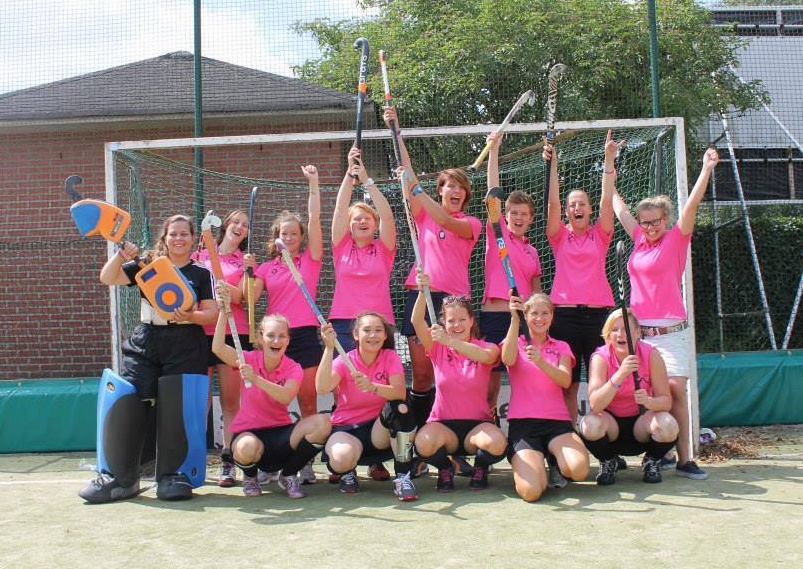 First ever tournament we participated in; we had no idea what to expect beforehand. We ended up in joint last place but that didn’t matter because we had SO much fun. An absolutely unforgettable experience and everlasting friendships were made.
This is also the moment where our team name originates from, given by the other teams: we were by far the youngest players. 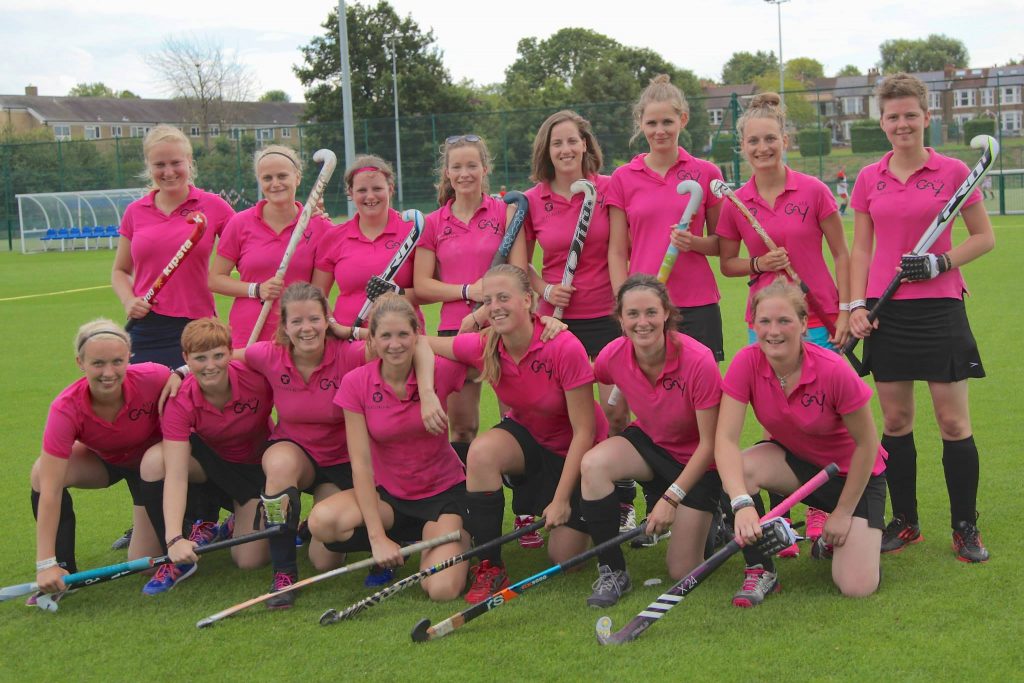 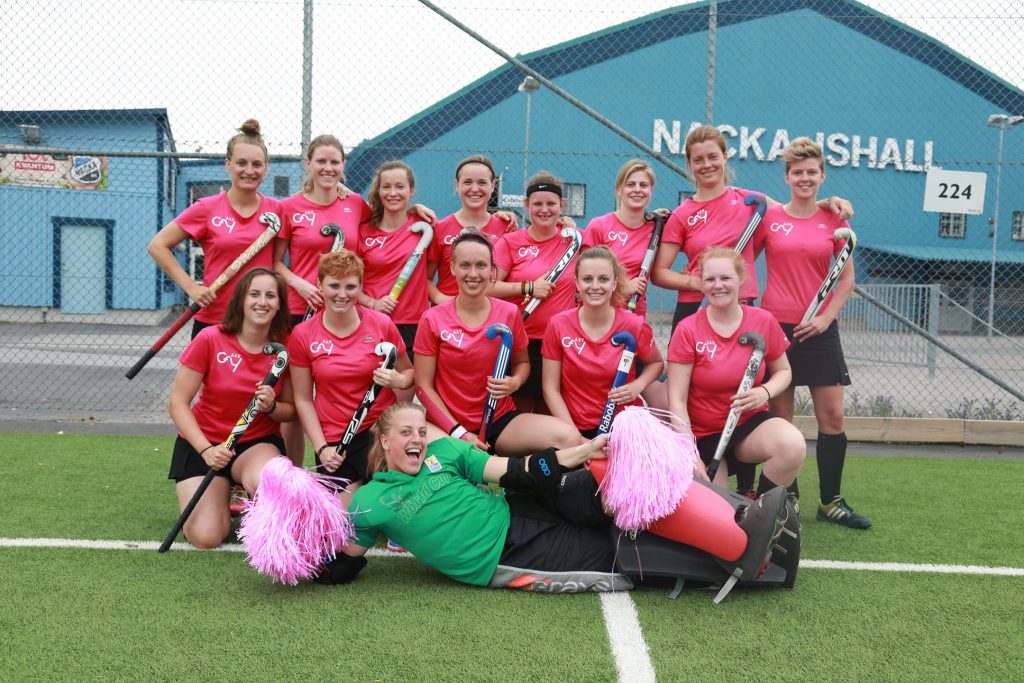 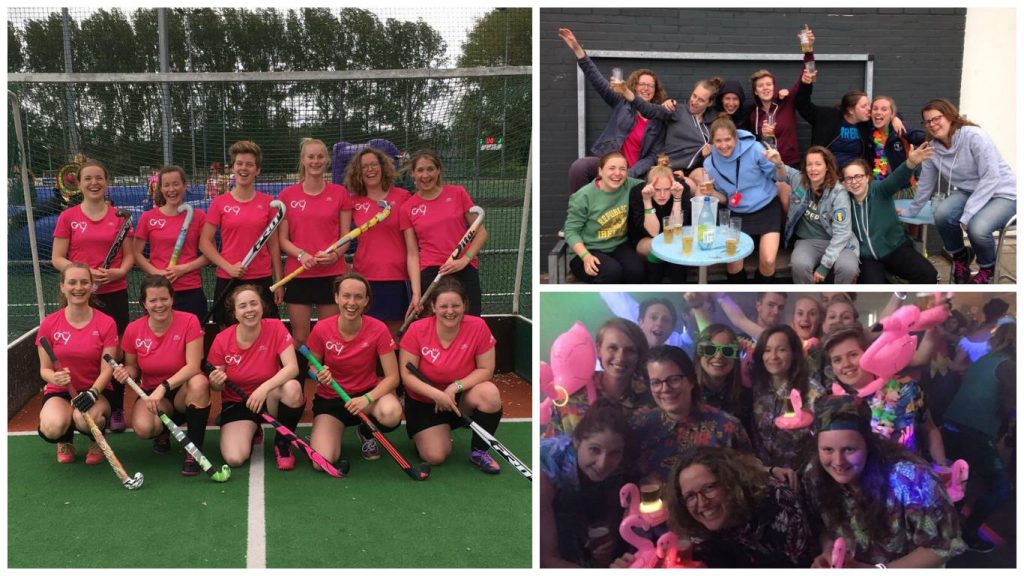 After three summers of PinkHockey tournaments we dared ourselves somewhere else: a Dutch student’s tournament. Eventually, this Pentecost weekend would turn into a historic moment because for the first time ever we secured a podium finish and ended up 3rd! 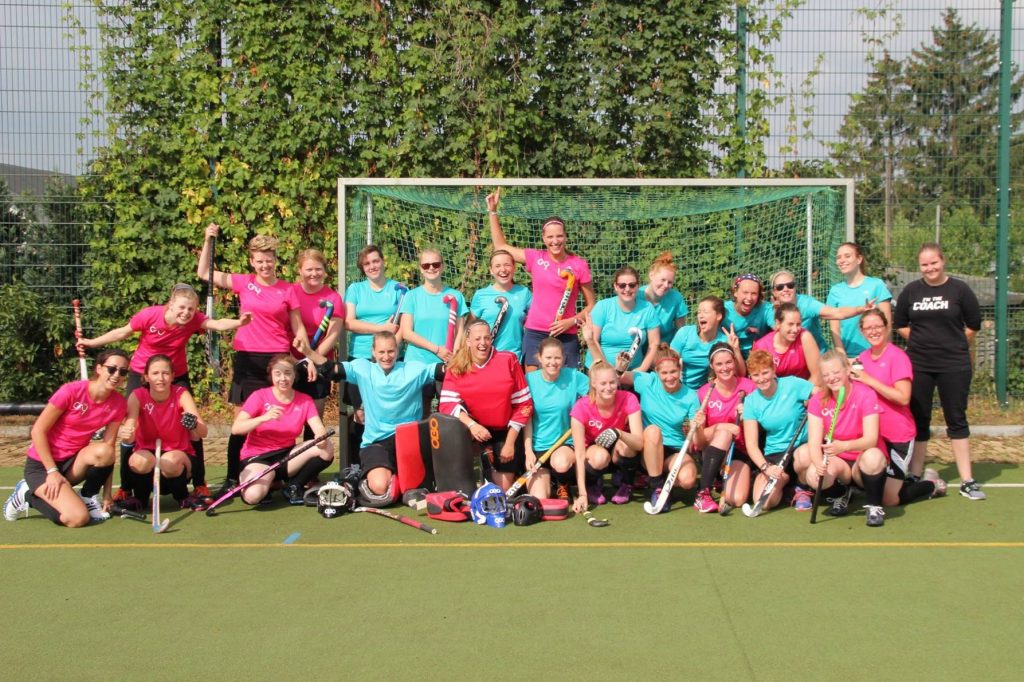 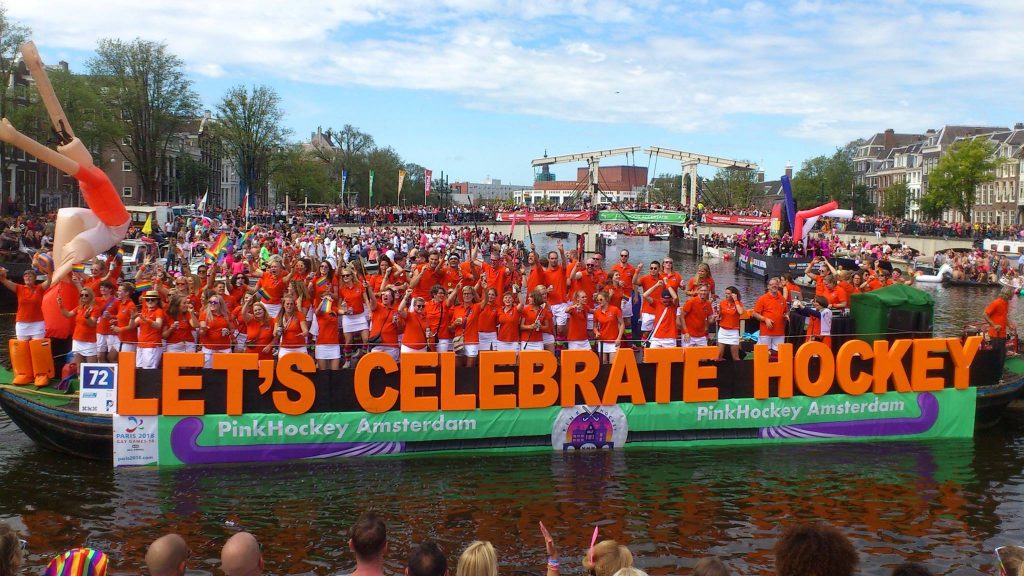 Pride 2017 was a unique moment and definitely an unforgettable day when our once wild idea became reality: we had our own boat at Amsterdam Pride! Filled with over 100 women and men from the PinkHockey community – from The Netherlands, UK, Ireland, and Germany – we conveyed the message that hockey is a sport for everyone whether you’re LGBT or not (because field hockey is still a very ‘straight’ sport). 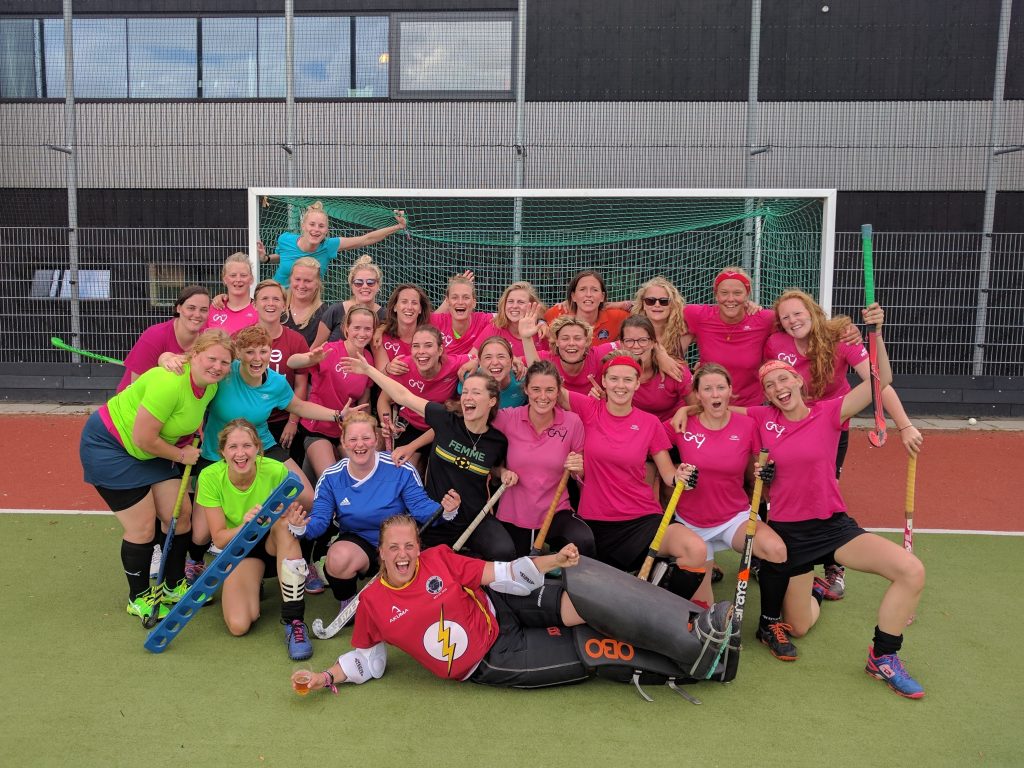 A week after the milestone the PinkHockey boat at Amsterdam Pride was, we hosted the official women’s tournament. A BIG SUCCESS. With 7 teams and 100 women, memories were made.
The Babygays participated once again with two teams, resulting in a bronze medal & 5th place. 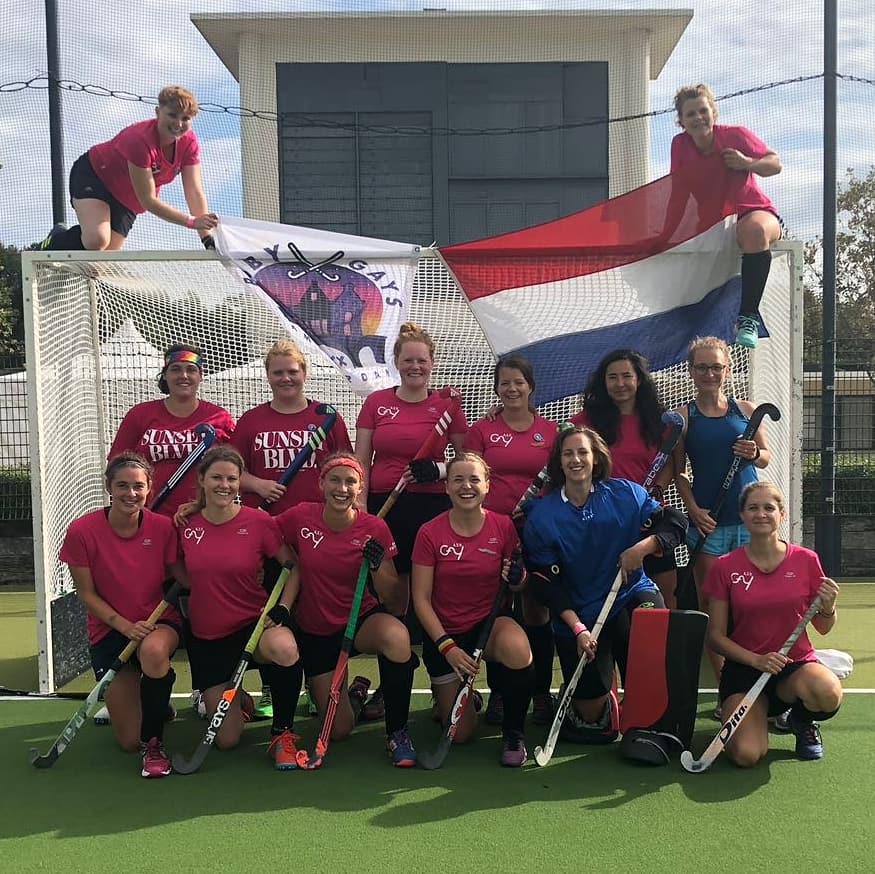 We were SO close to that bronze medal this year! Even though it was a tough loss to end up empty handed after a dramatic sudden death shootout for the bronze medal, we are so proud of everyone! It was another year with lots of progress and as a team we gave it all till the very end, in 30+ degree heat daily.

Following the latest measures of the Dutch government regarding the Corona virus (COVID-19), there is a ban on all organised gatherings of more than three people until June 1 and everyone has to keep 1.5 meters from each other.
.
This means there won’t be weekly training on Monday evenings until at least April 28, 2020 – but probably longer until further notice.
.
There is no info yet about the Eurogames in Dusseldorf, which are planned for mid-August – and can hopefully take place.
.
#StayHome #StaySafe #StayHealthy